“So much depends on evolution,” claims yearofevolution.org, a website showcasing the University of Pennsylvania and the Penn Museum’s intent to make a year-long celebration of Darwinism. The claim is common to Darwinist polemics, so it’ll be useful to critique the claims of the site.

First, we should ask, What actually depends on evolution?

Well, that depends on what we mean by evolution, doesn’t it? Do we mean small-scale changes within existing species [microevolution], the observable kind of evolution which no one, including Creationists and Intelligent Designists, disputes? Or do we mean large-scale changes of the proposed “molecules to man” sort [macroevolution or Darwinism] which Darwin speculated might occur, but is not demonstrable?

You see, there is a distinction, despite militant Darwinist Eugenie Scott’s purposely deceptive blanket definition of “change through time,” an equivocation tactic typical of those who feelthey must ardently defend macroevolution to prevent “a Divine Foot” from entering the realm of science, even if they have to lie for Darwin. [1] Though some have been suckered in by Gary Hurd’s 2005 assertion that the macro versus micro distinction is merely a Creationist fabrication [2], it was actually first recognised by Darwinists.

For example, in 1937 Theodosius Dobzahanshy wrote in Genetics and the Origin of Species:

“There is no way toward an understanding of the mechanism of macroevolutionary changes, which require time on a geological scale, other than through a full comprehension of the microevolutionary processes observable within the human lifetime. For this reason we are compelled at the present level of knowledge reluctantly to put a sign of equality between the mechanisms of micro- and macroevolution, and proceeding on this assumption, to push our investigations as far ahead as this working hypothesis will permit.”

So much for the “that crazy Creation macro versus micro canard again” straw man.

So what depends on macroevolution or Darwinism?

Well, not the sciences as we know them. Most of the pioneers of modern biology either preceded Darwin or, like Gregor Mendel, Richard Owen or Louis Agassiz, rejected his theory. These include:

While Dobzhansky claimed that “nothing makes sense except in the light of evolution,” [a claim echoed by yearofevolution.org], it seems that MUCH made sense BEFORE the advent of Darwinism and much makes sense if we omit it from the discussion. In fact, a belief in Darwinism actually hampered science, as Mendel’s work was ignored for decades simply because scientists thought they’d found the answer in Darwinism and had no further need to look. More to the point, Creation is actually foundational to science itself, not evolution!

But to be fair, let’s look at the supporting claims made by yearofevolution.org on their Why Evolution? page.

The reasons given are:

Let’s be honest, the first one doesn’t mean squat. A commemorative birthday celebration and a book anniversary have nothing to do with whether anything depends on evolution or not.

The second claim I’ve addressed above. Macroevolution [darwinism] isn’t the driving force in biology, although one could make a case for observable and testable microevolution in that regard. This another macro=micro bait and switch.

The last three all mention things like “artificial selection,” “domestication,” “human intervention” and “genetic engineering.” They relate to short-scale, observable microevolution, at best, not “molecules to man” macroevolution [darwinism]. Most of these processes also speak of intelligent [human] design, not any natural mechanism of evolution. As such, they are rabbit trails and have nothing to do with the topic.

The third claim needs addressing. Do viruses evolve? And does an understanding of evolutionary biology help us combat mutating microbes? The claim that viruses are evolving on a macroevolutionary scale must be assumed, as Dobzhansky pointed out. That viruses are mutating but still remaining viruses [only more resistant to vaccines] is demonstrably microevolution. Like much of biology, virology, immunology and biochemistry all came about before Darwin’s theory AND the established methods for preparing and administering vaccines are completely unaffected by macroevolutionary suppositions – or even suppositions to the contrary.

This puts me on mind of an illustration put forward by a Reddit user. 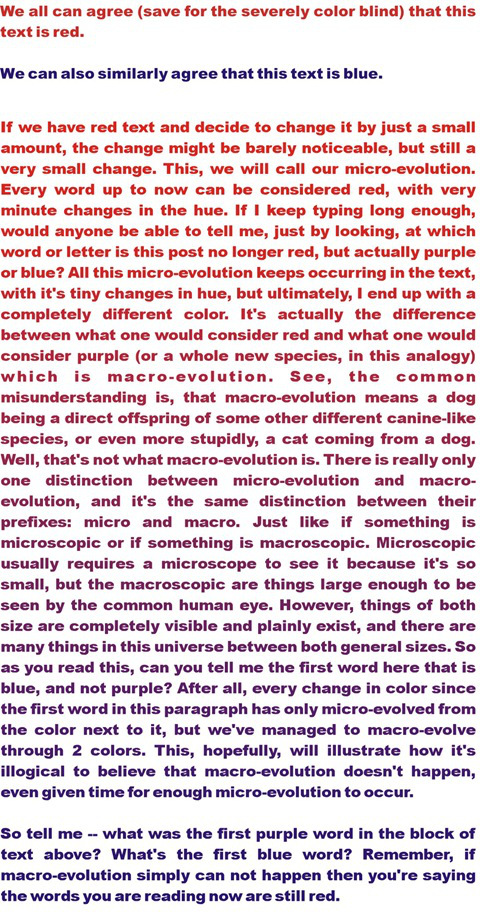 In the illustration, the author gives his opinion that microevolution leads to macroevolution. Clevery, he begins his font in red and by gradual successive change ends in blue, challenging us that:

“Every change in color since the first word in this paragraph has only micro-evolved from the color next to it, but we’ve managed to macro-evolve through 2 colors… Remember, if macro-evolution simply can jot happen then you’re saying the [blue] words you’re reading now are still red.”

My first thought was that his illustration was cleverly designed and, as such, illustrated Intelligent Design rather than macro-evolution via natural processes. That aside, I noted that the letters were still letters, that the words were still English words, that he did not seem to comprehend that macro-evolution is not the same thing as speciation, which creationists affirm. This was merely variation within a created kind, analogous to the amazing polymorphic variation in the Canine family or the Cichlids of Lake Malawi in Africa.

Once again, Darwinists have taken credit where none is due.

“So much depends on evolution,” they claim, but what?

The careers and reputations of the scientific status quo.

The exclusion of God from the realm of science.

But little else of consequence.

This article was originally posted on September 3, 2008.