On my recent vacation, I attended the opening day of the Ohio Renaissance Festival. I’d been to this one about 7 years ago, so I kind of knew what to expect.

There’s a few distinct groups who go to Ren Fairs: the performers and merchants [who often travel from fair to fair], Goths, metalheads, medieval history/period buffs, gamers, Wiccans, occultists, pagans and guys and gals who belong at ElfCon. [If you don’t know what I mean by the last comment, sorry. Everybody else got it.]

The Ohio Ren Festival used to pride itself in being historical, but things have changed. They now allow vendors to sell elf ears, fox tails [for fantasy anime’ fans] and other fantasy items, which they discouraged in the past. Since their patrons dressed up as fantasy characters anyway, especially gamers and anime’ fans, I suppose they decided they may as well make money off it. Of course, Wiccans, fortune tellers, occultists and the like were out in numbers that were clearly disproportionate to the actual 16th century world.

Which is to say the Ren Fairs have also become more Pagan.

By Pagan, I mean they’ve slid toward debauchery and counter-culture and erased every reference to the Christianity that dominated the period [at least as much as they could]. It was if they’ve created a mirror 16th century world in which the Church had little or no visible influence, far from the actual facts. It was hard to find any evidence of the Church, though all historical accounts cannot fail to note its dominance of much of the period. The fair still had its brown-robed monk with a phylactery strapped to his shaven head, but that guy didn’t bother much to stay in character. Every time I passed him, he was flirting with some pretty dame! If he was in character, we would have to conclude that he was playing a corrupt monk with no sincere Christian characters in evidence to balance the Ren Fair’s portrayal of the Church.

Which brings me to the chapel. The Ohio Renaissance Festival advertises that you can have your wedding at St. Peter’s Chapel by an ordained minister, but it seems that this is the chapel’s sole religious function [unless one counts the knighting ceremony, which I did not see and cannot comment upon]. The music scheduled at the chapel is much like that heard over the entire festival: Celtic, medeival generica, bawdy bar tunes, pirate songs, et cetera. But none of the songs one would have actually heard from the Church in the 16th century. On the other hand, to one side of the chapel sits a grouping of tombstones [ala Disney’s Haunted Mansion] but many of their punch lines are on the racy side. 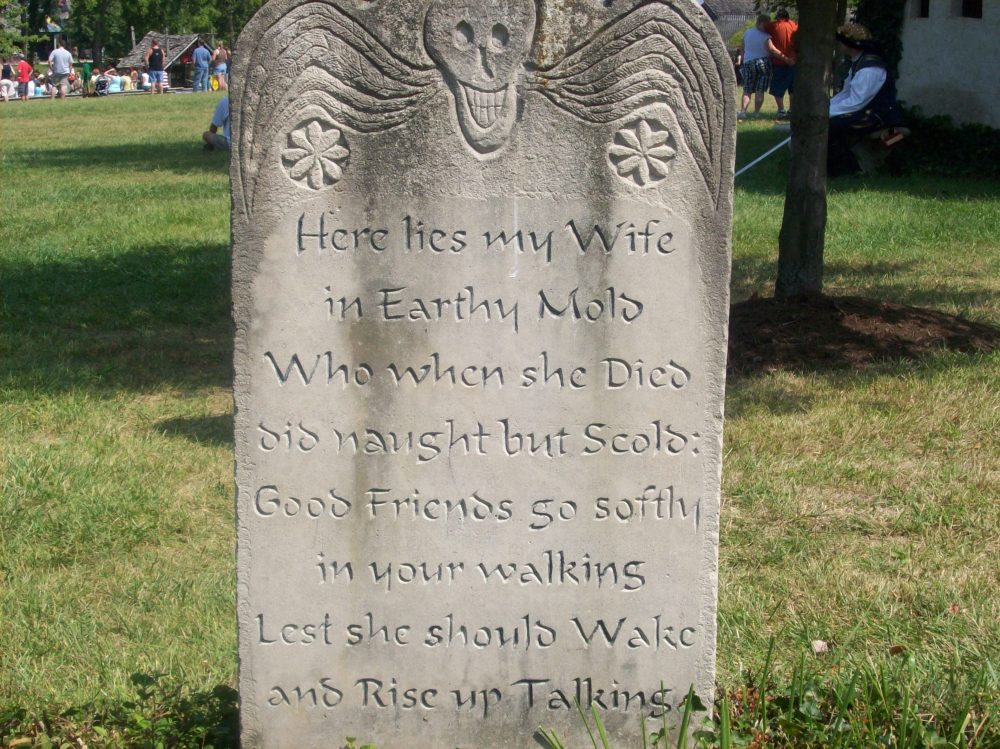 And that’s a shame. There may be a remedy, of course. For those Christians, such as myself who love medeival history and also love church history, it might be possible to right this imbalance a bit. We can come as Knights Hospitallers, warrior monks born of the Crusades, monks, priests or even medeival street performers and puppeteers, who often chose Biblical stories to which their audiences could already relate, or else re-enacted battles or fairy tales. Perhaps we could even audition to be cast members.

Ah, how imagination and boldness lend us many ways of being salt and light in a pagan society!