It is a sad truth, but there are Christians who object to the celebration of Christmas and Easter as vehemently as they oppose participation in Halloween. Like Jehovah’s Witnesses, they do not celebrate Christmas or Easter because they believe that these festivals are based on (or massively contaminated by) pagan customs and religions. The comparison is significant those who advocated position that we should not celebrate Christmas or Easter tend to belong to cultish Judaizer movements, also known as Jewish Roots movements.

Case in point, I received this ultimatum at one of the pages I admin:

I told him he was free to peddle his divisive nonsense elsewhere.

Easter as celebrated by all of the churches that these modern-day Judaizers are impugning is not pagan. Easter is celebrated as the resurrection of Christ in those churches.

Truth is not built on logical fallacies.

In fact, they are employing the etymological fallacy. They are basing their argument off the origins of the word Easter as a variation of a pagan goddess’ name and the fact that many of the modern traditions and trappings of Easter were also used in pagan worship. It almost goes without saying that the modern practice of such traditions and trappings is so far removed from pagan worship that most folks are surprised to learn that some people once practiced similar things with a far different intent! And worship does require intent. 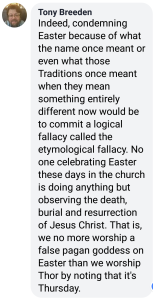 Which brings us to the etymological fallacy, a genetic fallacy that holds, erroneously, that the present-day meaning of a word or phrase should necessarily be similar to its historical meaning. For example, do you worship Norse gods and goddesses? Probably not, but did you know that the origin of the names of the days of the week are references to Norse mythology? What would you say to someone who suggested that you were a pagan idolater because you made an appointment on Thursday [Thor’s Day]? You’d tell him that the meaning of the word today [the fifth day of the week or the fourth weekday] has nothing to do with its origins! The same concept and fallacy applies to practices and symbols that have changed meaning over time or that differ in a completely different context. If Jesus was any indication, God is Not woodenly legalistic as these Judaizers paint Him out to be!

The other, more serious problem with rejecting Easter participation as pagan is that Easter was an established Christian celebration by the 2nd century AD. Back then, the only controversy was over when to hold the celebration. Syriac Christians asked a Jewish person when they were holding Passover and set the “Lord’s Pasch” to follow according to the Gospel narrative. Others paid no mind to Passover, resulting in multiple Paschal Sunday celebrations in different locations each year.

If you haven’t picked up on it yet, the original name given to Easter was Pascha (derived from the Jewish word for Passover). The observance predates the name Easter and all of the alleged pagan associations cited by critics. For example, the colored Easter egg has traditionally symbolized the empty tomb of Jesus, from which Jesus resurrected, and the act of rebirth itself. Additionally, staining Easter eggs red in memory of the blood of Christ is a tradition that can be traced back to early Christians of Mesopotamia. Now you could say that we Christianized pagan traditions but I think that misses the point (and quite on purpose) that things like Christians looked at those symbols and said, “You know, I’ve got a much better message for that.”

Some folks make a big deal about the date of the observance. This shows a bit of ignorance over the dating of Easter.

In 325 AD, the First Council of Nicea decreed that all Paschal celebrations should fall on a Sunday, irregardless of lunar phases, and that there should be one umiversally accepted date. This created a new controversy as to which Sunday it should be, but it also underscored the fact that the early Church had been observing Pascha for long before it was tied to the spring equinox.

In 664 AD, the Synod of Whitney decided that the Alexandrian method, which held that Easter Sunday must necessarily occur after the equinox, would be used throughout Christendom. This is basically the method we use today.

One of the reasons for the Synod of Whitney’s decision was that British Christians were using a method developed by Bede and church authorities wanted everyone on the same page. Venerable Bede is known as the Father of English History for his Ecclesiastical History of the English People, and it was he who helped establish the practice of dating forward from the birth of Christ as Anno Domini or AD, meaning “in the year of our Lord.” In The Reckoning of Time written in 725 AD, he wrote:

“Eostur-month, which is now interpreted as the paschal month, was formerly named after the goddess Eostre, and has given its name to the festival.”

Bede is literally the only source (though an important one) for Eostre being the etymological source of the word Easter. Notwithstanding, Anglo-Saxons didn’t borrow the name of a goddess for the feast of Christ’s resurrection; they borrowed the name of the natural phenomenon (the spring equinox) which was named in honor of her. Unless critics are going to say that we worship Frigga when we worship on Good Friday, or Thor when we observe Maundy Thursday, or even Odin when we come to Wednesday Night Bible Study (from the Old English Wōdnesdæg or “day of Odin,” named after the Germanic god Odin or Woden), and thereby continue to commit the etymological fallacy, I think we can put this pretense of a controversy to bed.

Rejoice in the Symbolism of Easter

Modern-day Judaizers don’t seem to comprehend that symbols have the meaning we assign to them. Rainbows have been appropriated by the LGBT movement, but depending upon the context we know that they can also designate a certain reading program or God’s promise to Noah. Palm branches are used to commemorate Christ’s Triumphal Entry into Jerusalem on Palm Sunday and were used in the Feast of Tabernacles (Leviticus 23:40), despite the fact that the palm was elsewhere sacred in Mesopotamian religions and represented immortality in Egypt. Orthodox Christian crack their colored Pascha eggs against another’s to symbolize their desire to break free from the bonds of sin. Others (perhaps unaware that there’s already such a thing as Pascha eggs) have created such things as Resurrection Eggs to redeem this largely secularized practice so that it tells the Gospel story. And, yes, when folks who are neither Pagan or Christian practice the colouring and finding of eggs during Eastertide, it’s a pretty good indication that the practice has become secularized.

The bottom line is that the meaning of a symbol is determined by its context.

Some churches have dispensed with calling the service Easter altogether in favor of calling it Resurrection Sunday or calling it Pascha or Paschal Sunday once more to make it clear that they are celebrating the Lamb of God’s victory over the grave. Not that a name change is necessary (A rose by any other name…), but I applaud their efforts to keep the focus of their observance on Christ rather than divisive arguments over the title of the service.

We should observe all of our holy days with intentionality, making those traditions more meaningful by appreciating how they accent and recount the Greatest Story Ever Told.

Rather than these doubtful disputings, which are neither praiseworthy nor serve to edify, we should celebrate the death, burial and resurrection of Christ on these days that all Christendom has set aside for this purpose. Because that’s what it’s all about.