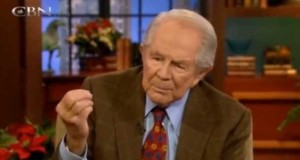 “I have three teenage boys and now two of them are questioning the Bible. This scares me! They tell me if the Bible is truth then I should be able to reasonably explain the existence of dinosaurs. This is just on of many things they question. Even my husband is agreeing with them. How do I explain things to them that the Bible doesn’t cover? I am so afraid that they are walking away from God. My biggest fear is not have my children and husband next to me in God’s kingdom.”

“I know people will probably lynch me for this, but Bishop Ussher, God bless him, wasn’t inspired by the Lord when he said it all took 6,000 years. It just didn’t. You go back in time, you have carbon dating, all these things, and you have the carcasses of dinosaurs frozen in time. They are out there. And so there was a time when these giant raptors were on the Earth and it was before the time of the Bible. So don’t try to cover it up and make like everything was 6,000 years, that’s not the Bible. If you fight revealed science, you’re going to lose your children, and I believe in telling it the way it was.”

In my last post on this subject, I dissected Pat Robertson’s doubt-inducing response. We looked at the bad arguments he’s borrowed and why he’s just dead wrong on the points he makes. Again, this is yet another great reason to give your money to your local assembly, as trhe Bible prescribes, rather than giving it to TV and radio ministries. [If you’re church wants to support said ministries, I advise that your deacons keep said ministry accountable!]

In this post, I’m going to give the answer that Pat Robertson would have [and should have] given if he truly believed the Bible is God’s revealed Word.

Michelle first notes that she has three teenage boys, two of whom are beginning to question the Bible. If Pat Robertson had read Already Gone, based on statistics gathered by America’s Research Group to determine why kids are leaving church, he would’ve had a much different answer.

America’s Research Group did their research amongst youth who once attended conservative churches [correctly reasoning that liberal churches suffer more significant losses]. The expected outcome was that just over 10% of those former church kids were still going to church during college. 90% had flown the coop by high school. OK, to be redundant, we expected that. But we didn’t expect to find that while 95% of these kids attended church regularly during their elementary and middle school years, only 55% were still attending during high school.

Waitasec! Aren’t they supposed to be graduating from church as they grab their high school diplomas? What happened to the middle schoolers? About 40% of the kids in our churches are already gone before high school [and of course this this where the book takes its name]. By the way, about 90% of those kids went to public school. Guess what they start teaching hot and heavy in middle school? Evolution and millions of years – the latter being the key issue here.

And of those who said they once attended church faithfully but no longer do so, 40% said they first started having doubts in middle school, with another 43% having their first doubts in high school. Most of them said that questioning was the cause of their doubts, which makes sense; the Edenic Serpent was the first to use this tactic when he asked, Did God reeeeeeally say??

Taking that information into account, Pat Robertson should have taken her question much more seriously than he did.

After noting that Michelle has every right to be concerned, Robertson should have assured her that the Bible does, in fact, reasonably explain the existence of dinosaurs. The Bible says that everything was created in 6 calendar days and that all air-breathing land animals were created on Day 6 [the same day as man]. Dinosaurs were air-breathing land animals; ergo, God created dinosaurs on Day 6. The Bible doesn’t name dinosaurs but that’s because the word wasn’t invented until 1842 by Sir Richard Owens. The King James Bible was printed in 1611. Curiously, the Bible does mention dragons. The Bible also describes a creature called behemoth in Job 40 which may well be a dinosaur. Some commentaries state that behemoth must have been a hippopotamus or a rhino, ignoring the part of the text that states that this creature had a “tail like a cedar tree.”

But how do we know that dinosaurs were alive at the time of the Flood? Because we have their fossils.

The fossil record is a record of death, suffering, disease, cancer and thorns. [That’s right: There are thorn fossils. There are also fossils of animals, including dinosaurs, that show evidence of cancer and tumors.] The Bible says that all of those things, especially death, were the result of Adam’s sin.  So if the Bible is God’s True History, these fossils and the rock layers they’re contained in were formed after Adam sinned. the only event that could have formed these fossils and rock layers in so short a time is Noah’s world-wide Flood. Remember: Rock layers like those we see at the Grand Canyon can either be made by a little bit of water over a loooooong time OR by a LOT of water over a little bit of time!

Afterward, they would have dispersed across the earth, likely becoming the basis of dragon legends the world over until mankind and ecological problems wiped them out, some time around the Middle Ages.

Of course, Pat Robertson didn’t answer her question about dinosaurs or how to deal with things the Bible doesn’t mention for that matter. He went straight for the age of the earth issue. As I just demonstrated, the Bible can rreasonably explain dinosaurs, even within a young earth context. For those things it does not directly address, it provides principles which may be applied to odern situations. In short, we can trust the Bible and there are always reasonable answers.

Pat Robertson, rather than being concerned about the praise of men, should have told Michelle that her fears were not unfounded, for doubts about the Bible are typically the cause of a large number of our youth leaving the church. He should have then reassured her that the Bible does provide reasonable answers to the questions her kids are raising.

Michelle, if you’re out there, I also recommend the following resources.

There are answers, Michelle. We’re praying for you and your family.