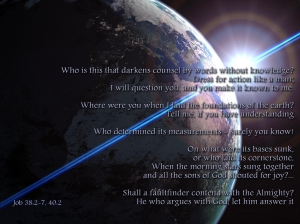 Recently, I came across an article by Karl Giberson, Vice President of BioLogos, called Creationists Drive Young People Out of the Church. The title refers to his interpretation of the meaning of a Barna survey: Six Reasons Young Christians Leave Church. Reason #3 was “Churches come across as antagonistic to science.”

In Giberson’s zeal to paint Bioblical Creationists in traitor’s colors with a standard “smeller’s the feller” argument, he criticizes an apologetics argument that finds its roots in a quote from God Himself.

Here’s what Giberson said in his article:

In a recent piece titled “Nine Year Old Challenges Nasa,” [Answers in Genesis president Ken] Ham blogged proudly about “Emma B” who, when told that a NASA moon rock was 3.75 billion years old, asked “Were you there?”

The suggestion that scientists cannot speak about the past unless “they were there” is a strange claim. The implication is that we cannot do something as simple as count tree rings and confidently declare “This great pine was standing here 2,000 years ago.” As a philosophy of science, such a restriction would completely rule out the scientific study of the past. This, of course, is precisely what the creationists want.

Many bright evangelical young people are, fortunately, not impressed with the suggestion that only “eyewitnesses” can speak about the past. Just this past spring I taught an honors seminar on science and religion at an evangelical college. The class included a couple of bright students who had grown up in fundamentalist churches that showed Ken Ham videos in their Sunday School class. Both of them recalled the encouragement to ask their teachers “Were you there?” And both of them, a few years older and wiser than “Emma B,” thought this suggestion was ridiculous and wondered what kind of ideas required the embrace of such nonsense on their behalf. These students — in fact, most of the students I have had over the years — will graduate from college accepting contemporary science and its various explanations for what has happened in the past. But unless the leadership in their churches does a better job with its teaching ministry, such students will have a hard time returning to their home churches.

The dismissive and even hostile approach to science taken by evangelical leaders like Ken Ham accounts for the Barna finding above. In the name of protecting Christianity from a secularism perceived as corrosive to the faith, the creationists are unwittingly driving the best and brightest evangelicals out of the church — or at least into the arms of the compromising Episcopalians, whom they despise. What remains after their exodus is an even more intellectually impoverished parallel culture, with even fewer resources to think about complex issues.

Karl Giberson means well, but he’s missed the point of the question, “Were you there?” I suspect he’s missed it quite on purpose, but either way he’s created a straw man argument as a result.

You see, when we ask, “Were you there?”, creationists are not claiming that we cannot determine the past unless we are eyewitnesses. Granted, we do point out that the further we go back in time, the less certainty we may have. Rather the point of “Were you there?” is to underscore the fact that we do have an Eyewitness account. This Eyewitness is God Himself who authored the Scriptures, which never came by the will of men (including the pre-scientific but nonetheless true history in Genesis). Unfortunately, this Creator (who never lies) testifies that the world did not come about by purely uniform, natural processes, a fact of the Text which Giberson chooses to ignore. He’s ignoring God’s testimony as irrelevant because modern scientists who’ve chained scientific inquiry to pure naturalism have concocted an all-natural Just-so story to replace the historical Creation account in Genesis.

So it is on the basis not of personal witness, but of Superior Witness that we object with “Were you there?”

Giberson should be careful here for another reason. The objection “Were you there?” originates with God Himself [Job 38:4], Who obviously found this type of question reasonable to ask those who doubt Him. You see, we use the objection, because God Himself made a point of it. Which of course makes it the height of arrogance to suggest that this approach is invalid.

Which leads me to ask…

Were YOU there, Karl Giberson?

For more on why kids truly leave church, see my review of Already Gone: Why Your Kids Will Quit Church & What You Can Do To Stop It