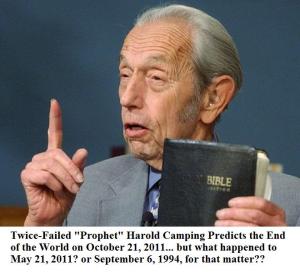 Shameless and twice-failed “prophet” Harold Camping of Family Radio predicted on May 31, 2011 [10 days after his latest failed Doomsday date] that on October 21, 2011 the remains of the unsaved will burst out of their graves.

According to a Christian Post article, Camping “has persistently maintained that his dates for a May 21 Judgment Day and a October 21 Doomsday are accurate. The only adjustment in his forecast, according to Camping, is that the judgment on May 21 came in a “spiritual” sense rather than a physical one marked by disasters like earthquakes.” But one should note that he confidently predicted that massive worldwide earthquakes would be a part of the May 21st non-event… until God made a liar of this false prophet!

Now Camping is saying “those who are unsaved are going to experience the curse of God.” Basically, whatever remains of the buried unsaved “will be thrown out of the grave” and be “like manure on the ground” on October 21st. “Furthermore, those who die on October 21 won’t receive a burial, said Camping. “They will be shamed in the eyes of God.”

Speaking of Memorial Day, Camping shamelessly opined, “One of the things that you’ll notice at this time of year. We’re talking about May 30 and we consider all the graves and all those who have died in connection with the armed services of the United States and there is great respect, great respect for them.” While he said this respect is proper, he again warned that “on the last day, all the unsaved are going to come under the curse of God. They are going to be thrown out of the grave if there are still a corpse there or bones. If they are in the grave, they will be shamed in the eyes of God. If they die on that day, they’re not going to be buried. They’re going to be shamed in the eyes of God.”

Camping conveniently believes the Church Age has ended and does not attend a church, which prevents him from hearing sound teaching that might contradict his date-setting nonsense and, more importantly, keeps him from the church discipline he should incur. Not to worry; on the real Judgment Day, Harold Camping will give an account to the Righteous Judge before Whom we must all give an account.

6But whoso shall offend one of these little ones which believe in me, it were better for him that a millstone were hanged about his neck, and that he were drowned in the depth of the sea.
7Woe unto the world because of offences! for it must needs be that offences come; but woe to that man by whom the offence cometh!

You can read the rest of the article at http://www.christianpost.com/news/harold-camping-dead-bodies-will-surface-from-graves-on-oct-21-doomsday-50677/