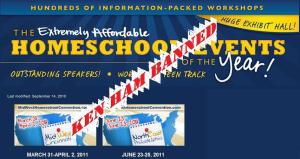 Many of you have read my previous article regarding Great Homeschool Conventions’ outrageous decision to permanently ban Ken ham and Answers in Genesis from all future conventions for calling Dr. Peter Enns of Biologios a compromiser for, well, compromising the plain meaning of Scripture for an arbitrarily applied “incarnational” interpretation of Scripture. GHC have remained tight-lipped concerning what specific incidents they based their highly subjective charge against Ken Ham’s “spirit” upon. We have only the say-so of their as-yet-anonymous Advisory Board that the charges were warranted and the extreme penalty justified.

In the midst of this, Dr. Susan Wise Bauer was implicated as a possible catalyst for the GHC Board’s unfathomable decision. The author of the Well-Trained Mind wields considerable influence in homeschooling circles and, furthermore, she publishes Dr. Peter Enn’s homeschool curriculum. It was easy to connect the dots, as it were.

Recently, Dr. Bauer and I corresponded by email. I initiated the conversation as part of my investigation:

I note that you have stated on your site that you did not ask that Ken Ham be ousted from the Great Homeschool Conventions not did you make this decision; however, as Dr. Enn’s publisher, it seems unlikely that you did not react to Mr. Ham’s criticism of Enns, his books and possibly yourself at all. The suggestion has been made that you brought your concerns to GHC’s Advisory Board with a statement to the effect that you weren’t sure if you wanted to be a part of the convention if products and speakers were going to be criticized thus and that GHC made their decision based partly on financial considerations.

Since you are a Christian and your husband a pastor, I wondered if you would mind providing things honest before God and men, as the Bible commands, by replying to whether this was in fact the case.

Thank you for asking, rather than assuming. I appreciate it.

I did not tell GHC that I would not participate in future conferences. I did not threaten to withdraw. I do not know what considerations went into the decision.

When I asked for clarification, she elaborated:

“I did not bring my concerns to the GHC board. They told me of the decision after it was made.”

As I was familiar with Dr. Bauer’s lament that people were coming up to her at the conventions, claiming that she was being accused of being “out to remove all Christianity from homeschooling and that’s she’s not even a Christian and that we shouldn’t buy any of her materials?” I asked her if she could affirm the physical, bodily resurrection of Christ. I’m happy to confirm that she responded to the affirmative:

“I absolutely, completely, and totally affirm the bodily resurrection of Christ–along with every part of both the Apostles and Nicene Creed. I am an entirely orthodox Christian and have spent my adult life in the service of my local church. There’s a whole list of my books and articles on my website.”

It’s possible that I might not agree with her on the definition of what consitutes orthodoxy, but she meets the requirement of a Christian.

I had also sent out an email to Olive Branch Books, asking them if they could clarify Dr. Bauer’s actions in connection with GHC’s decision or get me in touch with her. Mr. Justin Moore, editor of Olive Branch, sent me an email in response to the effect that he wanted peace between us and he’d be happy to answer my questions. I happily informed him that his boss had already responded to my satisfaction.

A portion of my response to him ought to clear up any remaining issues concerning Dr. Susan Wise Bauer’s connection to GHC’s [very bad] decision to permanently ban Ken Ham from future conferences:

“Dr. Bauer herself has actually cleared up a few of these questions in a Facebook email exchange. I am quite happy to take her word for it; I was not satisfied with ambiguity [on anyone’s part] in this matter, so I appreciate her integrity and forthrightness in responding to my questions directly.

She has stated to me that she did not contact GHC’s Advisory Board, much less make threats or insinuations, prior to their decision; I have no reason to doubt her statement. There are, after all, several reasons why an Advisory Board that claims to be Biblical [ie., Young earth] Creationist would oust one of the most well known Biblical Creationist speakers on the planet that do not involve Dr. Bauer’s direct involvement. For example, the as-yet-anonymous Board members might have heard complaints from Dr. Bauer’s supporters and acted on those without consulting or involving her in the slightest. Or the Advisory Board might have dropped in on Ken Ham’s presentations and simply not appreciated what they heard. There also exists the distinct possibility that Dr. Jay Wile has much to do with this. Like Dr. Bauer, he has considerable influence in the homeschool community and he was involved in this, for whatever reasons, from the very beginning. In fact, most commentators agree that Dr. Wile struck the match. The GHC Board may’ve been provoked by Dr. Wile’s prefacing blog article which describes Ken Ham as getting “really nasty” by calling Dr. Enns a compromiser.

I fully intend to write a post noting Dr. Bauer’s candor, with a note that I believe that she’s telling the truth and we need to consider other theories, sometime over the next few days. I don’t agree with her review of Dr. Enns’ view of an “incarnational” interpretation of Scripture any more than I like that she’s publishing his homeschool textbooks for him, but that’s not the issue I’m pursuing here. I have one simple aim, to come up with a theory that explains GHC’s extreme and permanent penalty in light of a highly subjective charge against Mr. Ham’s spirit for which GHC have provided zero specific evidence or instances upon which they based both their judgment and penalty. Since we’re charged to provide things honest before God and all men, their silence is downright sinful. Offering only vague spiritualized charges of a subjective nature, they are guilty of libel.

The problem is that Christian men are not satisfied with such vagarity. They immediately suspect that something more is afoot. At the very least, we suspect a rash judgment. Do not suppose that I wanted my theory to be proven true; I had hoped to have the pleasure of being disappointed. It is unfortunate that GHC’s silence in this matter has effectively opened Dr. Bauer up to speculation, given her connection to Dr. Enns as publisher, etc. She might consider asking GHC to be more forthcoming, as it has definitely thrown her under the bus, as it were. My intention was merely to judge the matter without partiality, which means of necessity Dr. Bauer’s motives, actions and connections to this debacle had to be critically explored. In all honesty, I thought it possible that she was actively involved in GHC’s decision but not probable; the only thing that left me wondering was her ambiguity [respectfully, she needs to practice a bit more “great plainnes of speech,” as the Apostle Paul would put it] on certain matters. Happily that has been put behind me. Like Edison, I have ruled out yet another way not to make a working electric light bulb, so my quest for the truth is narrowed down.”