How many times have you heard this? “The fossil record proves evolution!”

It doesn’t. Let me tell you why. Hey, I’ll even show you.

What the Geological Strata Charts don’t tell you.

Now, the picture we’re usually given to illustrate how evolution is demonstrated shows a cross-section of geological strata and some corresponding text to indicate that these strata represent specific ages. They’re all lined up nice and neat from beginning to end. Each slice has a group of representative fossils to show how life has allegedly progressed through the ages. The first few slices show jellyfish, worms and trilobites; the next shows fish; then amphibians and early reptiles; then dinosaurs; then mammals; and finally man. Nice and neat.

Of course, it’s just a drawing. Darwinists weren’t actually there, so it’s only their interpretation of what the fossil record means.

A few things these charts don’t tell you.

The fossil record is replete with examples of fossils which illustrate that the animals were swept up in some catastrophe and buried almost instantly!

The Last Meal of a Fossil Fish

We have animals which died in the middle of giving birth…

We have large animals [which is a “sizeable” argument for rapid burial in and of itself!] which died seemingly in the midst of struggle…

We have huge, mass graves where dinosaur fossils are jumbled together like so much flotsam after a flood — and little wonder if the Biblical account is true!

We even have soft-bodied animals and delicate structures such as dragonfly wings which were buried quickly enough to imprint themselves in mud before the decay made that impossible.

We even have horseshoe crab tracks preseved in stone. How did that escape erasure if stone takes millions of years to form out of mud?

Add to this the puzzle [for darwinists] of polystratic fossils, tree fossils which run vertically through several strata of rock.

If these strata allegedly represent billions of years, how did the tree survive long enough [without rotting] to become fossilized?  On an empirical level, the Mount Saint Helens eruption gave us a tangible example of how polystratic fossils might form. According to Answers in Genesis:

The volcano sent mud and debris hurtling down into Spirit Lake, sloshing a wave nearly 900 feet (300 m) up its initially tree-studded slopes. The wave sheared off trees with enough lumber to make all the houses in a large city! The trees were sheared off their roots and stripped of their leaves, branches, and bark. The “forest” of denuded logs floated out over the huge lake. As they water-logged, many sank vertically down into and through several layers of mud on the lake bottom. 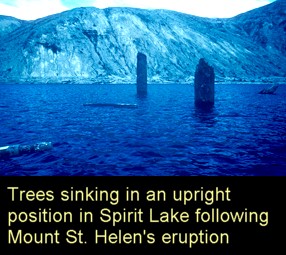 These are anamolies [mass burials all over the Earth, evidence of sudden burial of living creatures and polystrate fossils] created by the Old Earth uniformitarian assumptions, but which are easily accounted for by the Young Earth Biblical Catastrophic model.

Ironically, Darwinists and Creationists both agree that in order to be fossilized, the subjects had to be buried completely and very quickly at that to keep the subject from total decomposition so that there would be anything to fossilize! In fact, the debate is not that flooding and rapid burial are critical elements in fossilization; the debate is now whether there were hundreds [or thousands] of small, local flood events or a single global flood such as the Bible records.

Guess which one the Darwinists are promoting? Yep, the one that doesn’t lend credence to the Bible. It seems they would cut off their nose to spite their face, so long as they do not allow a Divine foot in the door. So much for parsimony.

A shorter version of this post is available for  download in PDF format as part of our free 13-part Defending Genesis church bulletin insert series [#8 in the series]. This series has been described a miniature course in Creation and Catastrophism. They can be used as church bulletin inserts or stand alone witnessing or apologetics tools.

A free podcast is also available of this post at DefendingGenesis.Podbean.com.